The “Naples Visitors Guide” will include information and illustrations of Naples most popular attractions! Included will be The Phil, Naples Players, the Zoo, von Liebig Center for the Arts, Cambier Park, C’mon, Palm Cottage and many more! Visitors will find the magazine invaluable in their effort to make the most of their stay.

The magazine will be distributed at the Naples Chamber of Commerce, many od Naples finest hotels, all restaurants that participate, all Real Estate companies that participate and of course shops downtown on 5th Avenue South, 3rd Street South, Mercato, Venetian Village and the Waterside Shops.

We invite you to join us in welcoming the tens of thousands that come to our paradise to be entertained, to shop, to eat or to purchase that new vacation or permanent home.

√  Page by page viewing on the web

Call me Or Email me for more information 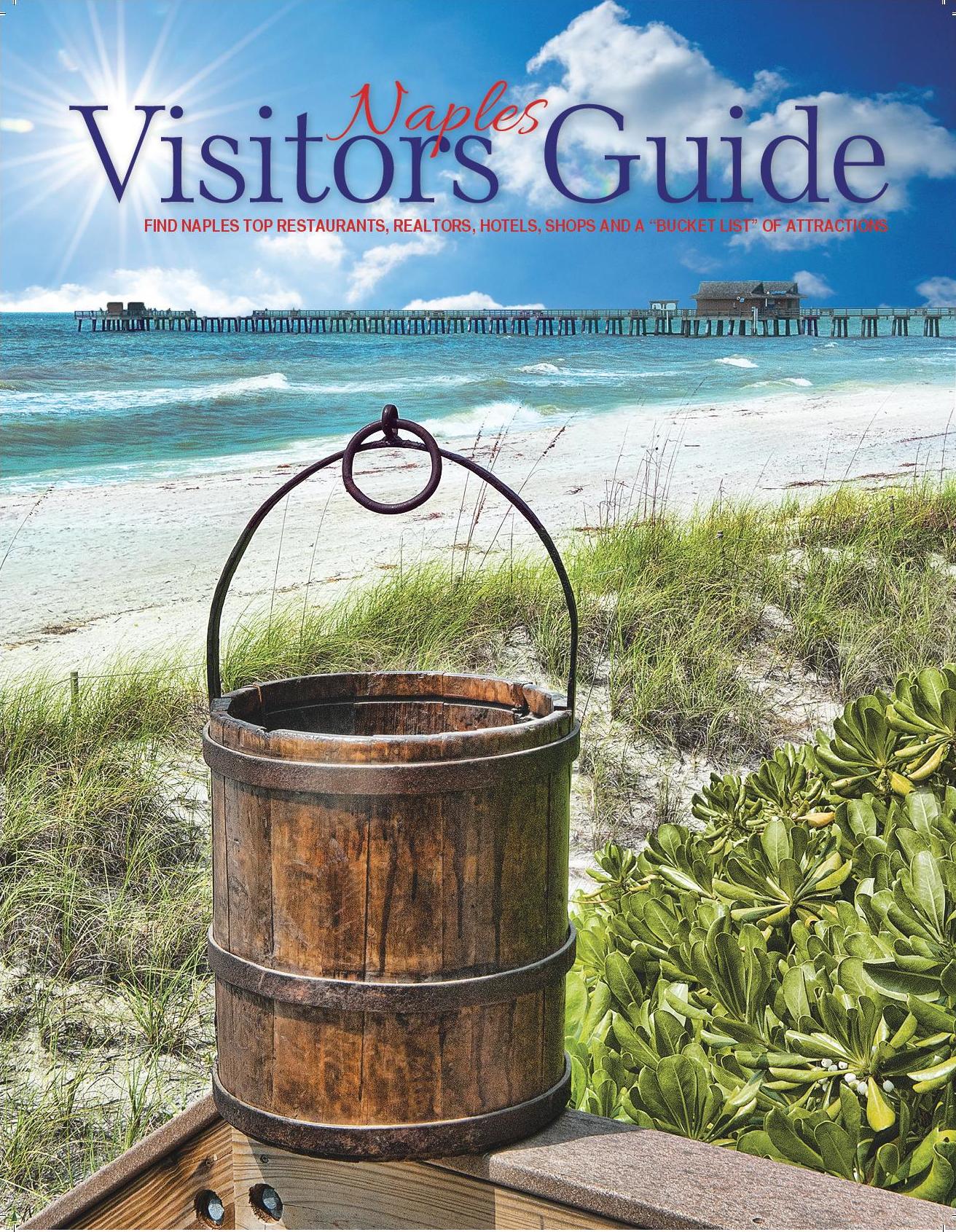 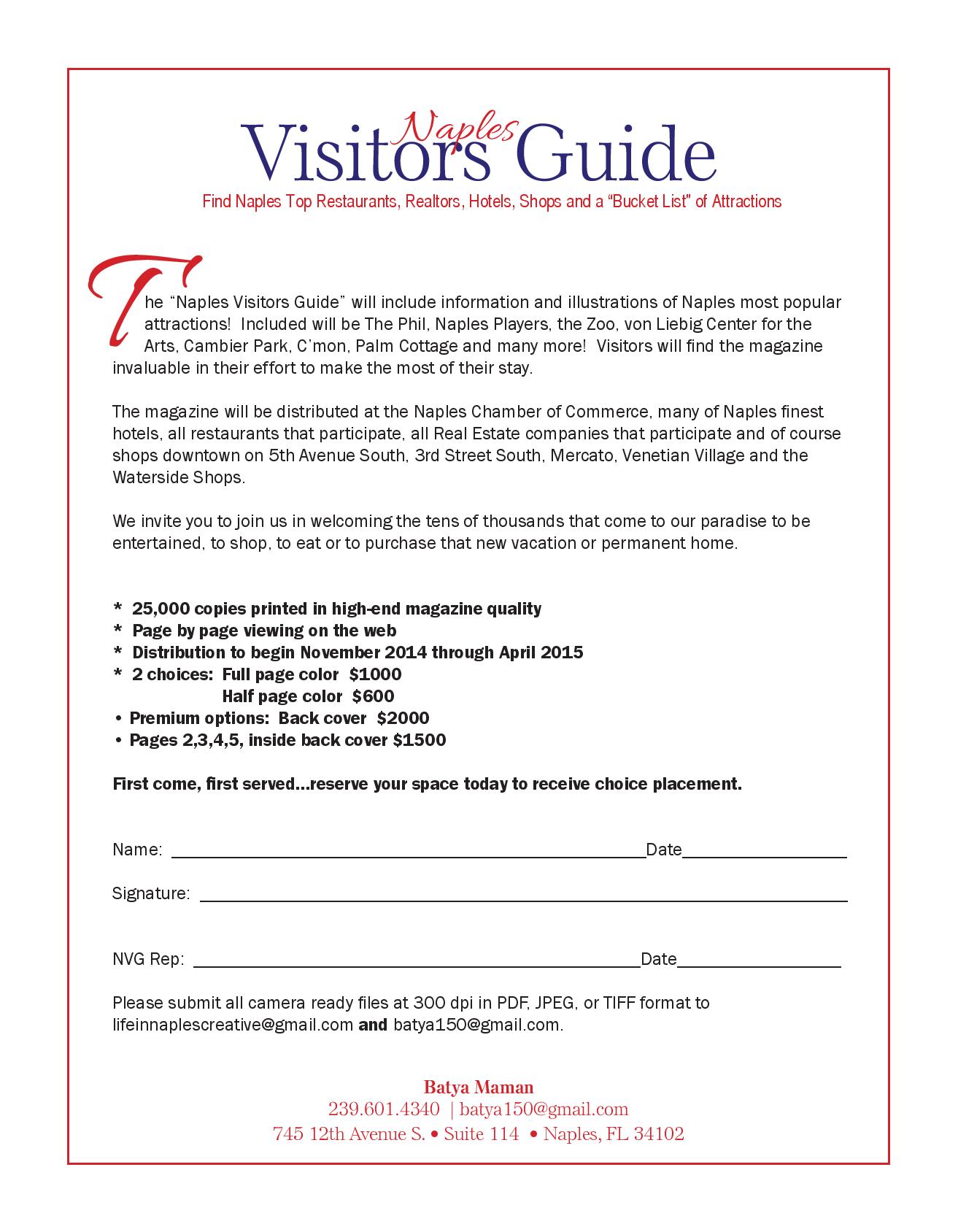 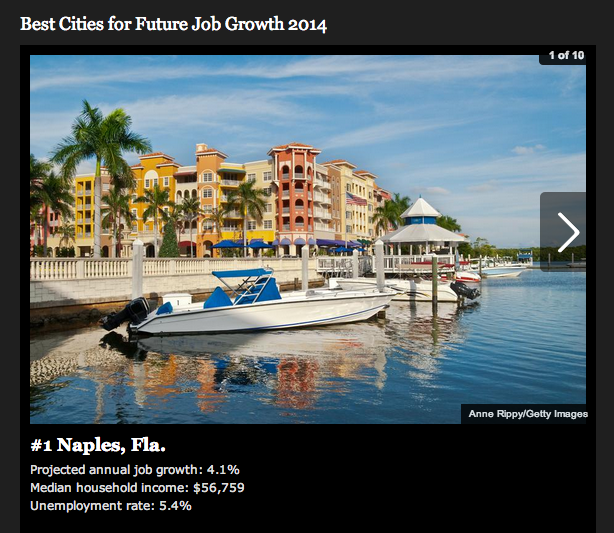 Florida’s economy experienced a tremendous surge during the first half of the 2000s when home prices jumped 120% between 2000 and 2006. The gains fueled more construction and speculative buying, while the unemployment rate for the state stood at a scant 3.3% throughout most of 2006. But when the financial crisis hit, Florida was smacked as hard as any state in the nation. Home prices plummeted, foreclosures soared and unemployment peaked at 11.4% for the state.

Florida has crawled back from the depths of the recession and the  employment outlook is bright, particularly for the retirement enclaves in the southern part of the state. Leading the way is Naples, which is expected to have the fastest job growth rate among the 200 largest metro areas with an annual rate of 4.1% through 2016, according to Moody’s Analytics.

“Demographic trends are healing and coming back,” says Arijit Dutta, an economist at Moody’s Analytics who tracks the Naples area. Migration to Florida came to a halt during the economic crisis as people lost their jobs or had trouble unloading their homes. Population growth fuels a number of key industries like housing and retail. Growth has now returned to the Sunshine State.

Florida added retail jobs at the fastest rate of any state in 2013 and Naples was the top market in Florida. Dutta expects retail sales to continue their momentum. Naples is also one of the wealthiest retirement areas in the U.S. and many retirees are sitting on big nest eggs that have skyrocketed with the strong equity markets over the past five years. These gains are fueling spending on construction and consumer goods in the area. The improved U.S. economy is also spurring more tourism, which is a major component of the south Florida market. Unemployment which peaked at 12.2% in Naples in January 2010 was just 5.4% last month.

Fellow southern Florida locales Cape Coral (3.7%) and Port St. Lucie (3.5%) also rank among the 10 metro areas with the highest projected job growth. These areas are not as wealthy as Naples, but the story is much the same with retiring Baby Boomers fueling employment gains in the communities. Roughly 25% of the population in Port St. Lucie is over 65. Jobs are mainly in healthcare, retail and leisure and hospitality, according to Moody’s Analytics economist Sarah Crane.

Austin, Tex. finished in second, a shade behind Naples, when it comes to metros with the best job growth prospects over the next three years. Companies flock to Austin to take advantage of the strong workforce options, which are continuously replenished by the University of Texas at Austin. The state’s flagship campus has more than 50,000 students, as well as 24,000 faculty and staff. People are moving to Austin to chase the jobs, as the metro boasts the third highest net migration rate in the U.S. over the last five years.

The Texas capital continues to be a major tech center with Dropbox, IBM IBM -0.43% andOracle ORCL -0.35% all announcing major expansions in the area over the last year. Technology security firm Websense revealed plans in February to move its corporate headquarters to Austin from San Diego in a deal that will create 470 jobs. “The city is quickly becoming a technology hub with an invigorating quality of life and multi-tiered workforce that fits well into our future plans,” said Websense CEO John McCormack in a release announcing the news.

Texas dominates the rest of top 10 with four other metros, in addition to Austin. Mexican border community McAllen ranks No. 3, while Dallas (No. 5), Houston (No. 9) and San Antonio (No. 10) also made the cut. All are expected to have annual job growth of at least 3.5%. The only places outside of Florida and Texas to make the cut for the top 10 metros for job growth are Greeley, Colo. and Raleigh, N.C., which ranks first on our annual look at the Best Places for Business and Careers.

This Slip-N-Slide Leads To a 50-Foot Dro

This Slip-N-Slide Leads To a 50-Foot Drop Off a Cliff. Would YOU Try It?? http://ow.ly/zotHb 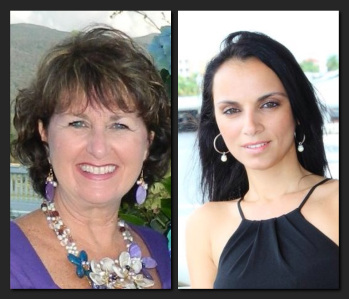 Sue Huff of E. Sue Huff & Associates Marketing and Management Consulting was the marketing guest speaker for MicroEnterprise Institute of Goodwill SWFL. Huff spoke to the Business Jump Start Class on July 10 on the subject of building a marketing plan with well thought out tactics and targets, and how to choose and utilize the right marketing tools for a particular business. Huff is a local marketing and management consultant with over 30 years of experience in working with small businesses and non-profit agencies. She is a co-founder of the annual “Thinking outside the box” seminar for non-profits and has been a community volunteer and speaker for many years. Batya Maman, founder of Social Connect LLC, spoke to the class on July 17 on the topic of Social Media Marketing. She gave easy and manageable tips on how business owners can use social media to grow their brand and revenues. Maman is known as a social media expert who helps her clients understand the power of internet and social media sites. With a background in computer technology and teaching, Maman aims to make her clients and audiences feel accomplished and empowered when entering the social media world. For more information about Huff or Maman: visit www.esuehuff.com and  batya150.wordpress.com

Copyright 2014 Scripps Media, Inc. All rights reserved. This material may not be published, broadcast, rewritten, or redistributed.

How to Generate Leads with Social Media

Quick Sprout’s infographic has some useful statistics and tips on how to use generate leads using social media.

How do you use it to generate leads? Check the infographic below for all the details

This Infographic is going to give you a quick view about how to increase your Twitter engagement by 324%. Don’t forget to share this post with your friends.

Google announced one of the most highly requested changes to Google+ since the social network debuted over three years ago: no more naming restrictions.

Over the years, as Google+ grew and its community became established, we steadily opened up this policy, from allowing +Page owners to use any name of their choosing to letting YouTube users bring their usernames into Google+. Today, we are taking the last step: there are no more restrictions on what name you can use.

WHY DO NEW EMPLOYEES LEAVE? http://ow.ly

WHY DO NEW EMPLOYEES LEAVE? http://ow.ly/zheyH

Sign up and grow your business with Social Media!